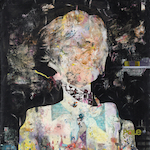 Tempus – The tense of a verb group is its form, which usually shows whether you are referring to past, present, or future time.

“This is a natural development to the last album,” says Pole’s Stefan Betke. “One which goes further and is even more complex.”

2020’s acclaimed album Fading, from the pioneering German electronic artist – who also re-released the era-defining trilogy 1,2,3 that year – was about coping with dementia and the loss of memory over time. Betke’s follow up, Tempus, is an album that considers the connection between the past, present and future.

It’s a natural topic to explore, not only because of the connection it clearly has with the themes explored on Fading, but because all of Pole’s work has an interconnectedness that spans past, present, and future. While each Pole album – his catalogue glides across ambient, dub, jazz, glitch, and electronica – is distinctly singular in its own right, the albums are part of an ongoing evolution that link as much to history as they do to the future. “My work is based on keeping elements from the past and developing them into the here and now,” Betke says. “It’s always based on trying to expand my musical language, so you will always find old elements but you will always find new. This is a step forward from Fading, and is connected to it, but it is also connected to all of my records.”

Musically, the album is also one that avoids easy categorisation, and Tempus exists in a unique space. The production is rich and enveloping, exuding dense yet crisp atmospherics on the opening ‘Cenote’, with drum sounds so punchy and dynamic you’d be forgiven for mistakenly thinking Betke was playing a real kit. This striking balance between complexity and compactness continues throughout.

As ever, the presence of dub within Betke’s idiosyncratic framework of electronic music, is a constant. However, its function perhaps takes on a more significant role in the context of this record. The dub effect units used in Pole’s music delay sound, keeping them a step behind the present before they are released and then they fade away again into a foggy reverb. The pace, tone and echo of dub effects are themselves traversing the essence of past, present and future within the album.

It’s also one of the most overtly jazz-leaning records in Betke’s career. However, given his inclination to do things originally, it’s a kind of deconstructed, mutated and manipulated form of jazz. The sparse drums and weaving basslines of ‘Alp’ possess an almost industrial jazz tone, while the closing ‘Allermannsharnisch’, with understated yet striking keys hovering over crisp beats, veers into a subtle yet experimental jazz territory.

However, despite the neatly executed concept and nuanced themes that run through the record, Betke is still willing to embrace mistakes and accidents. In the same way all his records connect, they also share the accidental feel that gave birth to the project as a whole (Pole being named after a broken Waldorf 4-Pole filter that gave him such a distinct sound.) Here, on ‘Stechmück’, you hear a strange, eerie, almost unsettling wailing sound that rings out above the bass-heavy beats. “That is the sound of my dying Minimoog,” Betke says. But instead of re-recording it, he incorporated the sound of a failing piece of electronic equipment into the heart of the song, thus giving it an entirely new tonal dimension.

The painting on the cover, by Wolfgang Betke titled Großstadtwanderer, links into the themes explored on the album. “It’s oil on canvas and what I really like is that, in a very similar way, it is super complex like my music,” says Betke. “I found the whole atmosphere in this totally weird confused head with these little shimmery eyes leaking through the colours to totally fit the idea of Tempus.”

Pole’s ongoing musical evolution, while retaining a relationship to previous work, means that he is already naturally building an ever-stronger bridge between the present and the past. However, the deeply innovative sounds that he continues to carve and explore, and always breaking new ground with each record, means that bridge is also being extended far into the future.

Pole Tempus is released by Mute on 18 November 2022 on vinyl, CD and digitally: https://mute.ffm.to/poletempus