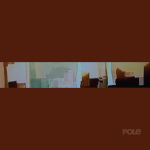 The new track originates from a series of loops created during the recording sessions for his first new album for Mute in over 15 years, Fading, which was released in November 2020. Fading was about loss of memory and how memory disappears over the years as we grow older, and these loops were discovered when Betke had returned to the original recordings. He explains, “I began working in my Berlin Studio, doing research and listening to the single recording sessions of Fading to remember what I did exactly and to find out what I think about the recording months after finishing it.”

Stefan Betke continues, “Tanzboden is an old fashioned word for a dancefloor constructed during the harvest time, mostly outdoors, and Rost is the German word for rust which is an interesting connection to Tanzboden. If the dancefloor is not really used for a long time anymore it starts to rust, and as the screws and metal plates which are holding the wooden parts together disappear slowly over the years, so does the Tanzboden itself.”

The two tracks both link back to Fading and at the same time mark the beginning of new recordings. “Listening to them with a new album in mind, I liked them even better!”