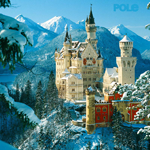 „Writing about music is like dancing about architecture – it’s a really stupid thing to want to do.“ This saying – usually attributed to Elvis Costello or Laurie Anderson – underestimates the urge many people have to read about music, even if it’s difficult to capture music in words. And this phrase was also coined by somebody totally unfamiliar with Pole’s music. Because when you listen to Pole, you always have the feeling that this is music that could be architecture, an elegantly spare form that reaches out into space. And it would thus be architecture you could dance to.

After minimalist experiments with elements of hip-hop and dub, Stefan Betke’s latest album has hardly any concrete references. What has remained, though, is the minimalism so characteristic of Pole. Built around little loops, his arrangements dispose with any kind of ornamentation. A stark contrast with the album’s title and cover – which shows a picture of the famously ornate, gingerbread-style castle Schloss Neuschwanstein.

But despite some funky grooves, this is no dancefloor record. And despite its simplicity, the music never comes across as meagre or repellently cool. This might be due to the fact that Pole has found a perfect middle point between avantgarde and pop. Pop in the sense of functional music, which wants to please and use familiar structures. And avantgarde, which, since early modernity has been characterised by a total lack of solicitousness, not seeking to be anything but an autonomous piece of art.

The beats are groovy, but never overtly dance-oriented. Melodies are used as harmonic dashes of colour, but remain fragmentary rather than sing-song-y. Some cracking noises pop up, but not as a dissonant element – they just seem a logical part of the sound structure.

The term “sound design” would, in this context, not be derogatory but a fitting term for the clearly structured textures which form the basis of Pole’s music. This music is not about mere comfort, and it’s certainly not made as the ideal, unobtrusive soundtrack for modern glass-and-concrete hotel bars. But it’s certainly about music that structures space and creates order. Formally, things dark, nebulous and irrational are alien to Pole. So it’s all the more amazing how well it nurtures daydreams – and practically invites listeners to drift off on flights of fancy. There is indeed one thing that Pole’s music shares with the visions of King Ludwig, who, in building Schloss Neuschwanstein, wanted to create a world for himself shielded from reality: Pole’s warm bass and powerful but elastic production style conveys a feeling of cosiness; it doesn’t take on the outside world, doesn’t mirror it or comment on it, but creates a world all its own.

Listen to “steingarten” on spotify.