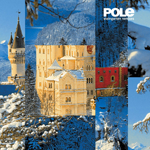 Remixing Pole is a bit of a challenge. Carefully assembled, piece by piece, his seamless ”Steingarten” (rockery) exhibits no gaps, no ornaments, no superfluous flourishes. And a closer look at the tracks’ underlying structure confirms: any additions would only distract from their delicate balance.
”Steingarten’s” eclectic assembly of equally eclectic remixers were well aware of this tricky challenge – and none have opted for unnecessary embellishments. With plenty of respect for Pole’s pared down appeal, they nevertheless imbue the new versions with their very own signature sound. While Stefan Betke aka Pole’s minimal approach sets the overall mood, subtle nuances add different flavours to the mix. Rarely has a remix project been this coherent. An assembly of reworkings by friends and colleagues, the resulting tracks achieve the rare feat of reinterpreting Pole’s music without ever drowning out their singular clarity.
While Dimbiman, for example, starts his ”Achterbahn” with a bout of gently bouncing beats that evolve into a springy House groove, Mike Huckaby takes a more angular approach, yet both remain true to ”Steingarten’s” bare essentials. From Deadbeat’s sharp, dancehall-inspired beats to Shackleton’s sizzling dub grooves and Gudrun Gut’s subdued vocal samples – a recited A-Z of girl’s names – the resulting works refuse to twist Pole’s music out of shape, but highlight, cherish and reflect their essence. Here, Betke’s distinctive sound finds itself clothed in a wide array of contemporary electronic guises, from Deep House to Dubstep. And, best of all, despite their sometimes dizzying level of abstraction, all tracks are extremely danceable!
Originally a string of four limited coloured vinyl 12“ releases, the ”Steingarten Remixes” CD now assembles all tracks of the series.

THE REMIXERS: A classically trained pianist and composer until his discovery of electronic music, Thomas Melchior works under several pseudonyms – Deepah, Sunpeople, Soul Capsule etc. – and counts among the pioneers of Minimal House.
Co-founder of the Berlin-based Perlon label and audio-visual project Pile (together with Markus Nikolai and Chris Rehberger) Dimbiman aka DJ Zip also collaborated with Carlos Peron (Yello) in the late 1980s. His solo project Dimbiman has been going since 1997.
Producer and DJ Mike Huckaby is a key figure of the Detroit scene. Mike Huckaby is mostly known for his recordings on Harmonie Park, under the ‘Deep Transportation’ title. Mike has been working on different production projects with artists such as Moodymann, Theo Parrish, Rick Wilhite, Cris Simmonds to name a few. and launched two labels: Deep Transportation and S y n t h. He says: “keeping the balance between deep house and quality techno is important”
Hailed one of the “upcoming 100 artists to watch” by URB magazines in 2004, Montreal’s The Mole has since released a stream of warm, pulsing disco tracks on labels like ‘Wagon Repait’, ‘Philpot’ and ‘Revolver’. Following releases on ‚Karloff Recordings’ and ‚Background’ with his recent debut long player on scape in febuary 2007, Frivolous aka Daniel Gardner excels in Minimal House treats brimming with humour and stylistic surprises, from smooth strings to jazzy arrangements.
Co-founder of London-based label ”Skull Disco” Sam Shackleton is a true master of bass-heavy Dubstep enriched with oriental flavours.
Bristol Dubstep pioneer Peverelist appropriates elements of British youth culture for his unique blend of Dubstep and Techno. Besides his own productions, he also runs the ‘Punch Drunk’ label with a roster including Pinch and Rob Smith (Smith & Mighty).
Starting out as Techno and Ambient DJ in the early 90 ́s Canadian DJ and producer Deadbeat is now considered one of Montreal’s foremost innovators with close connection to he Mutek Festival. The last few years have seen him moving ever closer to Dub and Dancehall.
Ghislain Poirier counts amongst the most distinctive new exponents of Montreal’s thriving young scene. His heady mix of Techno, Ragga and Hip-Hop – or, in his own words, ‘cosmopolitan bass & chunky digital dancehall’ – is about to see its debut release on Ninja Tune.
Founding member of seminal Punk/Wave outfits Malaria! and Mania D., Gudrun Gut has been co-presenting her eclectic ‘Ocean Club’ radio show (on ‘Radio Eins’, with Thomas Fehlmann) since 1997. The selfsame year, Gudrun Gut also launched her own ‘Monika Enterprise’ label, featuring artists like Barbara Morgenstern, Contriva and Michaela Melián, among others.

Listen to “steingarten remixes” on spotify.