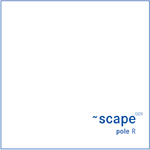 R = Room
R is the new album by Berlin-based producer and ~scape founder Stefan Betke aka Pole. And, at the same time, it isn’t. Central to the album are “Raum 1” and “Raum 2”, two tracks produced in late 1996 and released by DIN in 1998. Around this backbone, this source of inspiration, all other tracks are clustered – formally re-workings by Burt Friedman, Kit Clayton and Pole, but really totally new pieces, all of them. The recording process resulted in two further tracks, “Raum 3” and “Raum 4”, expanding on those variations, while the CD-version of R contains the original versions of “Raum 1” and “Raum 2”.

R = Rework
“A Pole remix album”, you might think. But R stands for “rework”, a far more expansive process. Initially, Burnt Friedman had planned to work on the two original “Raum”-tracks, shortly before Betke founded ~scape. This turned out to be quite a lengthy affair and inspired Pole to try his own hand at the old material. What was initially intended as a 12” EP quickly turned into a fully-fledged album with Kit Clayton’s contribution and four new tracks by Pole, all centred around the idea of room and space.
While the original of “Raum 1” remains a rather dark, dubby, glitchy affair, “Raum 2” happily grooves alongside domineering echoes and pulsating sounds with an almost playful edge – attributes not usually mentioned in the same breath as Pole. In his new version Stefan Betke substantially lightens up “Raum 1” and changes its rhythm.  “Raum 2”, on the other hand, he magically transformed into a dubby, groovy sound collage. Burnt Friedman contrasts the detailed, synthetic sound affairs with jazzy elements and combines abstract electronica with seductive harmonies. Kit Clayton, on the other hand, singles out the groove component, pushes it to the forefront and almost manages to create a secret dancefloor hit.  Naturally, this approach remains far removed from conventional Techno stompers, as Clayton focusses on the actual deconstruction of beats and then juxtaposes them with his distinctive sounds.  At the same time, all “reworkers” studied the source material, entered into an intense relationship, re-modelled it and thereby transformed the tracks into something decidedly unique.

R = Redefine
R is also Pole’s first collaboration with another artist – his versions of “Raum 1”, “Raum 2”, “Raum 3” and “Raum 4” were recorded with D. Meteo (Submission) on guitar.  “It wasn’t easy” says Betke, nevertheless emphasising the new horizons the collaboration has opened up, mentioning the “freedom” he has gained, contrasted by initial thoughts of “compromise” or “restraint” that often occur when a solo artist decides to work with other musicians.  But Pole now cherishes the additional creative potential to be reaped from collaborative production and bilateral feedback.  This influx of new ideas as well as the input by Burnt Friedman and Kit Clayton turn R into an extraordinary journey through sound.
(Jan Ole Jöhnk, 2001)

Listen to “R” on spotify.