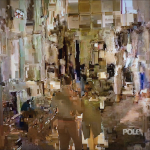 “Unfortunately there’s not a new piece of gear that broke making this album,” laughs Stefan Betke. “I don’t think that will ever happen again.”

Betke is referring to the origins of Pole and how accidentally dropping and breaking a Waldorf 4-Pole filter gave birth to both the name and distinct sound of his solo electronic project.
His opening trilogy of albums 1,2,3 were a benchmark moment in electronic music, with him seamlessly traversing across glitch, dub, minimal techno, ambient and electronica. Reissued by Mute earlier this year to celebrate the 20th anniversary, the trilogy reaffirmed its game-changing status in contemporary music. In their 5* review, The Observer called it “calming, abstract, minimal genius.”

To neatly solidify this year of Pole, Betke is also back with a new album Fading – his first since 2015’s Wald. As with every new Pole record, it’s part of a continued forward trajectory but it also connects to a pre-existing sonic framework. “Every Pole record connects to recordings that I’ve made before,” Betke says. “In order to stay in this kind of vertical development. The ideas from 1,2,3 up to now are connected. I keep the interesting elements, languages and vocabulary that I designed and add new elements.”

The idea of exploring one’s own history is also loosely linked to the inspiration for this record. “The album was mostly inspired by the idea of memory loss,” he says. “My mum had dementia and I saw her losing all the memory that she had accumulated over her 91 long years. When losing that memory it turned into what she was probably like in the beginning of her life when she was born – like an empty box.”

A concept album this is not however. The role of memory loss and his mother was simply a springboard for Betke, an idea to further explore through sound. “It was the motor for moving in this direction,” he says. “So for the opening track, ‘Drifting’, there is the idea of a whole lifespan that starts pretty empty and it gets fuller and then it ends with this kind of bell sound in the background. Or ‘Fading’, the last track, deals with the idea of fading away and disappearing slowly. But you always leave something. You leave a feeling or an image or an atmosphere. Everybody who lives leaves something on this earth.”

This approach gave Betke the opportunity to reconnect with his own memory and past. “You can hear some little pops and glitches in the background of this recording, which is a direct reference to the trilogy,” he says. “But you hear it relatively quietly in the background, it’s not really too heavily featured. This is a little bit of a sign from me, as my history is fading away slowly too.”

However, much like the subtlety of Betke’s past can be heard hissing and popping away like a faraway echo, the idea behind this album is to be considered more of an inspirational underpinning than a set-in-stone theme. Pole’s music has always been multifaceted, blurring lines, genres, tones and Fading is no different. ‘Tölpel’ melds immersive crackles with bass-heavy beats, ‘Tangente’ unfurls via subtle yet unpredictable pulses, whilst ‘Nebelkrähe’ manages to simultaneously feel intimate and richly warm yet also endlessly airy and spacious. “’Nebelkrähe’ is really one of my favourites because it is so heavy but has so many details in the background,” Betke says. “It also probably has the most direct connection to the trilogy.”

Due to the multifaceted nature of Betke, the end result is an album that feels as suited for immersive headphone listening as it does to being pummelled out through a PA loud enough to feel the bass rattle your ribcage. This has always been key for Pole. “Whenever I compose a piece of music it has to have this element to it,” he says. “I need to be able to listen to it in the car when I go to the seaside or in my living room or in a club. The main idea is to make music that is multifunctional. From the beginning onwards, that was always the idea.”

As someone who also runs a mastering studio for disc cutting and digital mastering
(scapemastering), the tone of the album was understandably something Betke spent a lot of time on. “I think it’s a really warm-sounding record,” he says. “I go really deep into the sound design. I was very focused on the depth of it. Instead of having 15 four-minute tracks I was more into focusing on 8 long pieces that actually sink in. I wanted to fill your head up with atmospheric sounds. I really try to avoid overloading the tracks. It has to be on this thin edge between just enough information to keep things interesting but not too many ideas that it gives the impression it could be two separate tracks.”

Pole may have begun life with the embrace of an accident but over the years it has morphed and transitioned into a finely tuned and honed project with a deft yet potent sense of evolution. However, accidents are still something to be cherished in Betke’s world; the striking artwork for the album being a prime example.  “During a super heavy thunderstorm my TV broke down and I couldn’t see anything for 10 minutes,” he says. “As my screen was trying to recover it looked very strange. Immediately I felt the need to get my camera. I took hundreds of pictures and when I was going through the photos I saw these three where there are people coming into the image and fading out at the end. They look like oil paintings, and the fading away process is remade in the trilogy of these photos.”

So the presentation of the final album merges a perfect blend of considered craft with an unpredictable accident – much like the trilogy that started all this off.  “I have a sense for mistakes,” he says. “I see a mistake coming. It was the same with the broken filter all those years ago. Everybody said, get this fucking thing repaired, it doesn’t do anything’. I said, ‘no, no, no, no’”.

Fading was released by Mute on 6 November 2020: https://mute.ffm.to/Fading