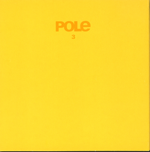 Release information (2000):
From Berlin-Mitte, a central district in greater Berlin, where Stefan Betke, the individual behind Pole, lives, it takes a mere 15 minutes to drive to the Koepenicker Strasse in Kreuzberg, where his studio is situated in a former warehouse. The contrast could not be more prominent. Berlin-Mitte is prospering, whereas the Kreuzberger Durchgangs-strasse, Kreuzberg’s main thoroughfare, is lined with abandoned industrial yards, scattered apartment buildings and the odd commercial site. Fortunately, the atmosphere inside the spacious studio Betke shares with a producer-friend of his exudes calmness. It is filled with natural light and barely furnished, unlike many other studios. A little equipment over here, a black leather armchair over there, white walls throughout, but foremost – a superb environment for sound. At this place of procrastination, accompanied by the constant low-level drone of machines, Pole’s music comes to life. Pole represents both the musical core of Betke’s working life as well as his philosophical attitude towards life in general.

Structurally, the music of Pole is based on abstract, irregular rhythms created by a defect, analogue sound filter Betke uses, namely the “Walldorf-4-Pol” filter. These rhythms principally are defect frequencies full of interference ( in audio terms commonly referred to as “noise” ), not unlike the crackling sounds of vintage vinyl, except for a harder, purely digital quality, which makes them very immediate. Quoting the production methods of Jamaican dub – taking monotonous rhythms out of context by using echoes and repetitive loops – Betke has put out three albums, titled “1”, “2” and now, “3”. All three possess a frugal use of melodies and bass woven into a texture of crackling rhythms omitted by the filter. Outburst of reverberations and the persistent crackling appear to be a simple recipe, but in reality each Pole composition is as elaborate as a central nervous system, complex both in structure and texture. “We are talking about attention to detail as opposed to superficial qualities”, says Betke, ” I spend a lot of my time reducing structural clutter in a song, step by step, layer after layer, until I reach a certain foundation of lasting value.” What may appear abstract is really something quite tangible: after a methodical elimination process, a structure of 1-2 minute length remains. This structure could theoretically be lopped infinitely withoutlosing its dynamics because it has become an entity in itsown right. “At this point, everything goes beyond the levelof pure ornamentation. When the texture is complete,bass lines and melodies fall into place, seemingly coming from nowhere, leaving a mark, only to disappear again.”

The audience is dancing: Stefan Betke, originally from Duesseldorf, but now a “Berliner” by choice is one of the few representatives of electronic music who have a respect for classical music history whilst totally embracing the up-to-date club-music genre. Like many other producers and musicians 33-year old Betke works as a DJ for radio and clubs (like WMF in Berlin), but unlike the majority he is not available for traditional bookings. In his incarnation as Pole Betke lends new meaning to the phrase “making the earth move” whenever the confessed workaholic is invited to appear in places like Cannes, Paris, the Sonar  Festival in Barcelona, New York, London, Manchester or somewhere in his native Germany. With the precision of an engineer and the keen ear of an expert that can detect sound where there only was silence, Betke literally turns the concrete basements, open-air venues and night-clubs in his path inside out. The fact that the devoted minimalist counts Steve Reich and Arnold Schoenberg, John Zorn, Arto Lindsay and Fred Frith as major influences has had no impact on his energy-draining concerts or his strict, purist and simple recordings as yet. All of the previous releases were recorded by Betke himself in his own studio, first in Cologne, and as  off “2”, in slight disarray due to the move, in Berlin, before he finally settled in Kreuzberg. Both the recent maxi CD “12”, containing the tracks “Rondell Eins” and “Rondell Zwei”, and the just completed third full-length release “3” – the yellow album – were recorded in that location. Event though the albums are numbered consecutively, with the numbers serving the purpose of a chronology or a simple, but functional system of archiving, Pole’s instrumental tracks on “3” have literary-inspired titles like “Überfahrt” and “Taxi”. Dating back to “1”, the songs had names such as “Kirschenessen” (=eating cherries) or “Fliegen” (=fly). The res album, “2”, carries on with this tradition with conceptual song titles such as “Streit” (=dispute), “Hafen” (=harbour), and “Huckepack” (=piggyback). Stefan Betke bases these names on his own personal association with a particular song, and they also serve as his private method of archival. This conceptual structure instantly becomes evident, even to outsiders.

The crackling has remained on “3”. But you can sense invisible undercurrents of energy, a sublime suppression of power on the album. Like a car’s engine revving angrilyagainst a pulled handbrake, a latent feeling of nervousness is present. It is, however, heavily mantled by a matter-of fact relaxedness. Repetitive bass lines and evasive flurries of melody are at work, persistent and laidback and once and hold songs and album together. The means-to-an-end Stefan Betke employs are multitudinous: one track (“Karussel” =carousel) is slowed down to the pace of footsteps, you can literally hear the energy being held back. Another track (“Klettern” =climb) excites with manifold guises that could be likened to the abstract expressionism of Jackson Pollock. On yet some other tracks (“Strand” =beach) garbled voices are trailing in from far-away realms, distant, estranged, not recognizable as voices any more. In a sense, these sounds evoke emotions and memories, just as Betke is able to name tracks by association alone.

Generally speaking, “3” embodies the qualities of previous Pole releases: with every year the disk (the vinyl variety, not the CD) ages, the real scratches and cracks increase in number. Just like a good wine, Pole vinyl gets more valuable with age.