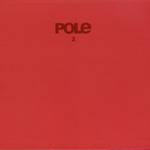 album information 1999:
Few records last year, if any, sent such seismic waves through the ever expanding terrains of electronica as Stefan Betke’s POLE 1. The album had a certain organic feel to it in the way sounds were subtly reduced into something quite beautiful.
On POLE 2 Betke has shifted the emphasis away from the heavily featured random crackles and excursions into dub pioneer history on 1.Now POLE explores deeper into the dub method by concentrating on the crucial bass line. Previously distorted and way down at sub levels, the bass is rejuvenated, sharper and clearer on 2.
The meanwhile legendary defective Waldorf filter has come into its own as a regular participant in the proceedings. Whereas background melodies filtered in and out of the original release with its warm, somehow “analogue” aesthetic, POLE 2 features melody centre stage, capturing some of that Augustus Pablo magic.
The tracks on POLE 2 have already been showcased in stunning live sets in Berlin (the Bienale), London, Hamburg (Sous Terrain) as well as in USA / Canada.
Back home in Berlin, POLE will shortly be performing at the “Atonal Festival” closing show before the unique electronic composer Oskar Sala, the Hindemith student who went on to devise the sound effects for Hitchcock’s “The Birds”.
Press reactions to POLE have been overwhelmingly positive, outside Germany as well as inside. Check UK magazine “The Wire” for proof of his status in England.
Across the ocean, a buzz has been growing in the States on the back of exports, leading to a deal with the renowned independent label Matador.
Screaming teenagers have yet to be spotted outside Betke’s Japanese hotel. But don’t rule it out.